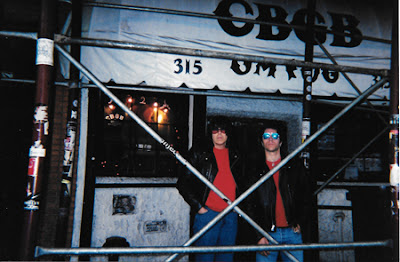 One day Johnny asked me, "What's been the highlight so far with our friendship?"
I responded with, "Taking me up to San Francisco to hang with Kurt Hammet and Metallica."

Johnny said, "Well, I got something better. The Ramones are getting inducted into the Rock And Roll Hall Of Fame, the ceremony is in New York, and your coming!”

I almost shit myself!

Never in a million years did I think my life would be going in this direction. To top it off, we flew first class, took a limo from the airport to the Waldorf Astoria where we were staying, and where the ceremony was being held. The Ramones were having a documentary film crew following us through all of this. Johnny made sure they put me in it. Watch The Ramones, End Of The Century Documentary. I'm in the elevator with him and Linda as were entering the ballroom to the ceremony. I'm the young unknown guy in the shot. If you ever get a chance to go to the Rock And Roll Hall Of Fame Induction Ceremony, I strongly recommend you go! It's pretty amazing to see a legend get into the rock and roll hall of fame, and to be sitting at their table, while surrounded by the best in the music business.

Little did I know that this was my training ground for building my own brand. Johnny took care of everything for the Ramones during their career. He was the accountant for the band. He pretty much managed the whole deal for the other guys. From what Johnny told me, the others were pretty hands off. I never met Joey because they didn't speak to one another, but I did meet the others and believe me, I see why John took care of things. Johnny was all about look of the Ramones and making sure they always stayed true to their identity. He was Militant in his actions. This had a profound effect on me. To see a Rock Musician be so diligent and consistent in his ways. This was my University on how to be a Rock Star.